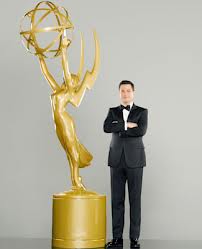 This year my Primetime Emmy experience began up-close and personal the night before at the annual “Evening Before” party to benefit the Motion Picture Television Fund.  Literally everyone from television was in attendance and I have to say looking quite fabulous in their casual chic attire.  A veritable who’s who of TV’s biggest celebrities mingled while noshing on food and sipping libations from Wolfgang Puck’s menu of selections.  Smiles, hugs, handshakes and good humor were on tap with cast members ranging from Glee and Girls to Mad Men and Modern Family chatting and wishing one another the best of luck.  Popular performance artists, Gil and Jill Bumby a/k/a the Bumbys, were on hand to give “fair and honest appraisals” of one’s appearance as celebs and regular folk lined up inside the Essie nail polish tent to obtain their readings.  (I have to admit I got sucked into this, but was happy to receive a 9.4 out of 10 on my style and will say that their written assessment was spot on!).

What struck me the most was how much better everyone looked in person and how much smaller everyone is in real life!!  The camera really does add pounds and inches!  I was also surprised at how late everyone partied knowing they’d have to get up early, look rested, and do it all again the next day.

On Emmy night, the heat turned up literally and figuratively.  Stylists dressed their stars in this season’s hottest colors while they struggled not to sweat in the blistering heat.  On the red carpet, the ladies hit home runs outfitted in shades of grey, burgundy, blue and yellow.  My heart went out to the number of men who must have been sweating bullets in their Brooks Brothers Black Fleece label suits.

Although it was Jane Lynch who hosted the previous year, the pressure was on for Jimmy Kimmel to perform and to perhaps try to top the other Jimmy (Fallon) who seemed to have so much fun hosting in 2010.  All in all, I think he did a pretty decent job delivering a hassle-free and humorous show.  Here is our red carpet manners recap on some of the night’s most noticeable hits and misses.

Style on Steroids – Okay, I love fashion as much as the next gal, but the gratuitous plugs for the designers are beginning to take the emphasis away from the celebrities actually wearing them!  Having to sit through the mispronunciations of the names and the laundry list of mentions from shoes, to jewelry to handbags has made the whole red carpet experience seem a bit vacuous.  E! has jumped on the bandwagon in a big way displaying their ginormous 360 Glam Cam, their Stiletto Cam, and now the debut of their Mani Cam (giving props to all the fashionable nails).  Yes, we know everyone is dying to see a close up shot of Kat Dennings’ cleavage and Sophia Vergara’s backside in circular motion, but I think I’m officially over it.  To me, it was much more interesting to see one of entertainment’s married royal couples, Leslie Mann and Judd Apatow, take to the cam for a traditional dip.  To me, that is true Hollywood glamour.

Combustible Busts – While we’re on the topic of bosoms. We simply cannot ignore the voluptuous Two Broke Girls Kat Dennings and Mad Men’s Christina Hendricks who both chose to emphasize their  G-d given gifts with figure hugging dresses that were conversation topics all to themselves.  Kat Dennings openly admitted to E! that she decided to flaunt them because “no matter what I do, they are there!”  She also confessed that her posture may be less than perfect as she favors the hunched over position which is better for keeping “the girls” inside the dress where they belong!

A Hassle Free, Humorous Host – After sitting through two hours of red carpet arrivals, we caught a first glimpse of our host, Jimmy Kimmel.  The opening sequence for the Emmy’s involved him crying in a bathroom stall over a botched Botox session in an absolutely hysterical, if not irreverent, look at the double-standard females face to appear eternally young in the eyes of the media.  The pre-taped skit included TV’s funniest female nominees taking swings at Kimmel to help punch his features back into their original position.  Once he had everything back in the right place, a very fit and dapper looking Kimmel took the stage.  Although he seemed a tad nervous at first, rushing his lines without pausing for reaction, he quickly settled in for some truly funny and poignant jokes.  My favorites were the ones where he poked fun at the actors themselves speaking candidly about their most difficult roles when they have to play “an actor who is happy for the success of another actor.” When he addressed the audience directly assuring them that the show would end on time so they could go home and put on their “fat pants” was perfection!  There were no major offenses or risky behaviors a la Ricky Gervais to mention, only a prank that involved Tracy Morgan pretending to pass out on stage which fell short. Another attempt where his parents were escorted out of the audience for lying to him was more well-received.

Acceptance Speech Gone Awry – Our apologies in advance, Julie Bowen, but we have to make mention of your acceptance speech which had one too many mentions of “pesky nipple covers” for our liking. Picking up her consecutive second win for Outstanding Supporting Actress in the hit comedy, Modern Family, the striking vision in yellow seemed to struggle to be witty and went seriously south in her speech detailing what life on a TV set is really like underneath the clothing and makeup.

Staples, Surprises & Spouses – Most everyone was expecting to see the list of staple winners and losers on Emmy night, but there were still a few surprises including the multiple wins for under-the-radar favorite, Louis C.K. and statues going to Jon Cryer for the first time as Outstanding Lead Actor and Julia Louis-Dreyfus who won for Lead Actress in Veep. Out of their 17 noms, not one award went to Mad Men.  Instead, the many awards went to new darling, Homeland which at last put Showtime on the map in the drama category beating out longtime competitor HBO.  On a separate note, one of the things we noticed in many of the speeches on Emmy night, was the showering of accolades to the countless spouses and partners of all the winners who so graciously remembered to thank their significant others for their unwavering support and love.  How sweet!

Posted by Lisa Gache at 3:52 PM No comments: 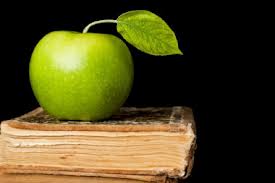 On the final night of summer, parents countrywide prepared for the annual ritual of going back to school.  They busily organized backpacks with new supplies, painstakingly prepared lunch boxes with the latest healthy (or not so healthy) fare, selectively laid out outfits or uniforms to help their kids look presentable, and perhaps snuck in a handwritten note in their notebooks wishing their kids a great first day!

Mission accomplished, they tucked their children into bed and let out one last remark reiterating their excitement about new teachers and inspired curriculum's, meeting new friends and maintaining old relationships. They reminded them to remember the six pillars of character and be mindful of the golden rule.  With the parenting checklist for back-to-school preparation completed, they breathed a collective sigh of relief.

Not so fast parents!  There is still work to be done.  It is virtually impossible to steer your  kids in the right direction - trust me, they will never listen - without taking a good close look at yourselves and your own back-to-school behavior.  As you slowly integrate into schedules and school lunches this week, take a moment to review our list of dos and don’ts.  Remember, your children emulate you and will do as you do and not as you say. Better to set them on the right course by setting a good example. You certainly don’t want anyone pointing a finger at them and saying the apple doesn’t fall far from the tree.

Posted by Beverly Hills Manners at 2:07 PM No comments: