Manners Monday - Voting Day Etiquette on the Eve of the Election 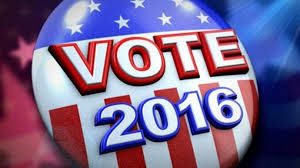 Tuesday, November 8, 2016, will be remembered as Election Day for one of the most contentious Presidential races in American history. While the FBI's decision to close the case on Clinton's email controversy has provided her with a last minute boost and a Survey Monkey six-point lead, tomorrow is guaranteed to be a nail-biter nonetheless. Polls placing Clinton and Trump virtually neck-in-neck in some regions will have the citizens of this country clinging to their seats with anticipation until the official outcome arrives.

Whether you love him or hate him, The Donald’s larger-than-life persona is largely responsible for the increase in voter registration and, has frankly, fueled new interest in the modern election process. The entertainment factor alone has garnered more viewership of the debates and round-the-clock commentary on every news network and Twitter feed known to man. Don't get me wrong, both campaigns have contributed an extraordinary amount of work to raising voter awareness which has resulted in the historic turnout of Latino and Asian-American voters and more people to the polls in general.

But the tenor of our country has taken a turn for the worse.  From the beginning, the narrative of this election has been one of choosing the candidate you hate the least! Both are heavily flawed with critical issues of character coming into question, and when asked about the tone of the Presidential race, a recent survey revealed that eight in ten Americans were either disgusted or repulsed.

While you may not feel particularly jazzed about either Clinton or Trump, your vote matters more than ever. Exercise your right and make your voice heard. Forty-two million Americans voted early with record numbers in Florida, North Carolina, and Nevada, but the crucial states of New Hampshire and Ohio are still up for grabs.  If you've already cast your vote in California via absentee ballot like my husband and me, congratulations, you will avoid the craziness at the polls. However, if you prefer the tradition of heading to a local polling booth on Tuesday, we've compiled a list of voting day etiquette do’s and don’ts to ensure the process is smooth and drama-free. Lord knows, after more than eighteen months of this grueling campaign, we don't need no more stinking drama! Good luck everyone, may the best (wo)man win!!

DO
DON’T
As if you need more incentive, there are a multitude of Election Day freebies to take advantage of and inspire you to get to the polls extra early.  Don't forget to proudly display your "I Voted" sticker.

Posted by Beverly Hills Manners at 10:50 AM No comments: