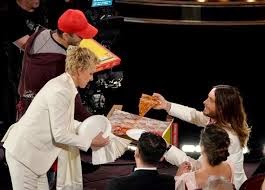 The gloomy skies parted just in time for Oscars’ big night and who better to bring the sunshine than the ever cheerful, Ellen Degeneres. All the months of rehearsing paid off as she achieved her mission to make “Oscar” accessible, warm and friendly just like her Emmy Award winning talk show “Ellen.”  Her brand did not deviate - in a good way - with light-hearted, under-the-radar, self-deprecating humor that garnered genuine laughs rather than the typical forced chuckles from the audience. After a brief introduction that made mention of her hosting gig seven years prior and the familiar faces that once again graced the list of nominees, she launched right into her monologue with an hysterical opening line about the weather, “For those of you watching around the world, it’s been a tough couple of days for us. It has been raining. We’re fine. Thank you for your prayers.” So simple and yet poking massive fun at how unequipped this town is to deal with rain.

She broke television barriers by bringing the audience in close for an impromptu "Selfie" (which set a Twitter record of 2 million for the most retweets) with some of Hollywood’s biggest names and ordering cheese pizzas for the starving celebrities who squeezed into their respective gowns and tuxes and hadn’t eaten a morsel in days. The bit was hilarious, but then turned tedious when Big Momma's Pizza arrived and viewers were forced to watch while the distribution of the pizza and then the collection of money for the delivery man. I was sure someone was going to touch their greasy fingers on their formal clothes and rue the day this happened.

She cracked funny jokes, “Lupita Nyong’o is here. She is from Kenya. She is a Kenyan. Barkhad Abdi from Captain Phillips is here. He is nominated. He is from Somalia. He is a sommelier. So he knows a lot about wine. Who’s the wine captain now?!”

She teased celebrities both young and old. June Squibb, the oldest nominee, was singled out as if she was hard of hearing, "I'm telling everyone you were wonderful in NEBRASKA!" Jennifer Lawrence, still a newbie, was the butt of a long joke referencing her trouble with tripping (she fell ascending the staircase to receive her Best Actress award last year and then fell again getting out of her car on the red carpet before this year’s show) prompting Ellen to say, “If you win tonight, I think we should bring you the Oscar!” Jonah Hill also received a nod for his role in The Wolf of Wall Street garnering one of the bigger laughs of the evening, "You showed us something in that film that I haven't seen in a very long time!"

She had one mean-spirited moment taking a jab at Liza Minnelli referring to her as “Sir” that left viewers scratching their heads, but then redeemed herself in the end with a joke about racism in Hollywood exclaiming, "Anything could happen tonight! So many possibilities. Possibility number one, “12 Years a Slave” wins Best Picture. Possibility number two, you're all racists. And on that note she welcomed “first white presenter, Anne Hathaway.”

What captured our attention in this year’s red carpet manners Oscar roundup?

Trending on the Red Carpet. Every red carpet has its theme as if designers and stylists engage in a pow wow beforehand to determine the trends. This show was no different. Standout colors were snow white, blush tones and shades of blue. Actresses from Kate Hudson and Naomi Watts to Calista Flockhart and Corinne Foxx (Jamie’s daughter) opted for white with the men getting into the game as well. Ryan Seacrest, Matthew McConaughey and Jared Leto all wore white tuxedo jackets some with contrasting accessories. Shades of blue were also a hit. The most talked about was Lupita Nyong'o’s Niarobi blue Prada dress which she wore as an homage to her country. Sandra Bullock and Amy Adams also wore blue as did many of the A-list men from DiCaprio to Spacey who decided on a navy tuxedo rather than the typical black formal wear. Ellen single-handedly brought back the female tux appearing first in navy velour, then in all-white ensemble and finally a black smoking jacket. Strapless or backless gowns took precedence along with statement necklaces and Veronica Lake tresses. Jennifer Lawrence was a stand out in Dior red as was a shimmering Kristin Chenoweth in metallic gold Cavalli. Cate Blanchett, Sally Hawkins, Angelina Jolie and a slew of others preferred figure hugging embellished blush tones. The biggest misses of the evening came from two Hollywood sweethearts, Julia Roberts and Anne Hathaway, whose black dresses only served to distract and detracted from their natural beauty.

Spreading Positive Vibes. Pharrell was a constant topic of conversation wearing a laid back Lanvin tuxedo with knee length shorts and leather lace ups with no socks.  His album GIRL dropped the same night as Oscar continuing the wave of wild success.  As the first musical performer of the evening, his nominated song “Happy” set the tone with childlike dancing and innocent pleasure that brought a welcomed looseness to the room.

Church Moment. Darlene Love was so moved by her win for Best Documentary for "20 Feet from Stardom", that she broke out in song and brought the house to its feet with a spiritual, church choir jam that had everyone silently saying “Amen.”

Mom’s Night Out.  Oscar moms were all the rage as Jonah Hill, Leonardo DiCaprio, Matthew McConaughey and Jared Leto escorted their proud mothers on their arms showering them with love, admiration and gratitude. These strong women clearly raised good, wholesome sons.

Ovations Worthy of Standing. Backup singer extraordinaire, Darlene Love, received the first standing ovation of the evening kicking off a domino effect of standing ovations for all the musical performances from Pink and U2 to Bette Midler and Idina Menzel.

Executive Decisions. One of the most noticeable allowances came from producing pair Craig Zadan and Neil Meron.  Although there was a set 45 second limit to speeches, it seemed that recipients of the golden statue were able to own the mike for as long as their hearts desired. No matter how long or awkward, every major award winner had their moment and was able to complete their thanks without fear of getting cut off by the exit music.

The Year of Spectacular Speeches. While we're on the subject of speeches, the best by far came from Jared Leto for “Dallas Buyers Club” and Lupita Nyong'o and Steve McQueen for “12 Years a Slave.” These fine recipients spoke intelligently and eloquently. They were thought-provoking and moving. They remembered to thank their team, both personal and professional. They acknowledged the politics of their subject matter, and above all, they were gracious and grateful.

Tough Prenounciation.  There were a few very tough names to memorize and rehearse if you were a presenter or part of the press at this year's Oscars.  Lupita Nyong'o, Alfonso Cuaron, Chiwetel Ejiofor, Barkhad Abdi were at the top of the list.  So when a seasoned John Travolta butchered legendary Broadway star, Idina Menzel's name by introducing her instead as "Adele Dazeem," the firestorm of backlash began. The faux pas was so big that it inspired an instant name generator that will Travoltify any name.

Unfortunate Elder Statesmen. While it is an honor to be asked, future older thespians may wish to decline rather than face the scrutiny.  Poor Kim Novak's plastic surgery made it nearly impossible for her to move her mouth while attempting to present her award. Although aided by the beautiful Angelina Jolie, Sidney Poitier's speech was slower than usual and had us hanging on every word to make sure he was still breathing. Veteran actresses, Bette Midler and Sally Field, hit home runs in our book exuding both strength and beauty.

Bonus Thank Yous & Engraving. When the winners walked backstage they were escorted to a bar where they could have their golden statuette immediately engraved and emblazoned with their name. Also backstage, was a brilliant stunt by Good Morning America that allowed winners to write down the names of anyone they inadvertently forgot to thank onstage garnering extra points with those they may have accidentally hurt.

This was one of the first Oscars where I had watched nearly all of the nominated films and I have to admit, I was only sad that "Nebraska" did not receive much recognition.  In my opinion, it was a brilliant, uncomplicated film that deserved more accolades, but I'm not a member of the voting academy.  Oh well.  And there you have it. See you next year!  Alright, alright, alright…

Posted by Beverly Hills Manners at 11:04 AM No comments: